A fairy tale… with attitude. 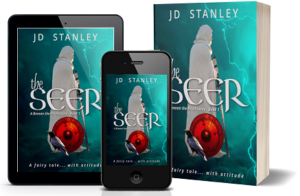 The Seer: An Irish Druid in Roman Britain

“Pity he had not heeded his own counsel and chosen with greater care those many years before.” 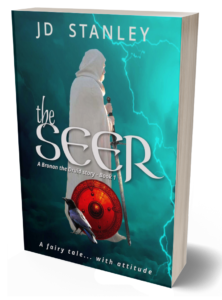 Displaced Irish Druid, Bronan, knows the real reason for the fall of Edenshire. As fourth century Christendom terrorises earthy gods into myth throughout Roman Britain, though one of the last living agents of the Mother Goddess, She no longer speaks to him and no matter what he does, his gazing bowl reveals nothing beyond the flames of their destruction. Because the king is dead. And it’s his fault.

After a magical pact with his best friend, King Manfred, didn’t bear out as their salvation from internal treachery, thirteen years later, Bronan flounders under the guilt of his horrible mistake. Manfred’s depraved brother, Barry the Red, drowns the throne in bloody madness so heinous, the Land itself cries out for justice while Sir William and his knights still loyal to Manfred play cat-and-mouse with Barry’s vicious mercenaries. Amid unsavoury plans for the orphaned, now marriageable-aged Princess Brigit, she battles lessons in ladyship and craves the sword and bow put into her hands by her adopted uncle William. And looks to her Druid warden as much more than only a teacher. Brigit is their next best hope, but she may never sit on the throne despite her stubbornness and protection by Bronan and her father’s knights. They would all die for her. And will if Barry has his way.

Bronan must act. The path to victory is through the forbidden truth in his heart and a painful past he trained himself to ignore, but until he breaks the unconscious bounds he placed on himself to reclaim his honour, no amount of magical fury, righteous revenge or secrets within his sacred oak grove can save them.

“You know you are going to enjoy a book when the first pages make you grin” courtesy award-winning British author K.J. Simmill, Book review: JD Stanley – The Seer

“The Seer by JD Stanley was unexpectedly immersive. I had no idea that this book would be such a gem. The narrative style is very unique; the author has a flair with words that becomes apparent as you read on. The characters and their development were on point, the author gave the characters a lot of room to grow and show their potential. Nothing was rushed, everything was paced just right and the plot moved smoothly for me to stay invested in the story. I enjoyed the suspense; I enjoyed how Bronan worked as a guardian angel for not only Brigit but everyone. I usually don’t enjoy epic fantasies much, but this is definitely a brilliant novel! Pure entertainment.” Reviewed Rabia Tanveer for Readers’ Favorite

“JD Stanley does an excellent job of building a bygone world and those we like to imagine inhabiting it in The Seer. The characters are extraordinarily well developed, with emphasis on Princess Brigit, Bronan, and the realistic portrayal of Sir William Robert. Despite this, I actually found the deplorable and grotesque King Barry to be the most fascinating, but I suppose any antagonist worth his sage and salt must be. The writing itself is clean and the story moves at a quick pace” Reviewed by Jamie Michele for Readers’ Favorite

Pick up The Seer from your favourite online book retailer