Self-Publishing – Why Your Book Needs a Book Trailer

Having a book trailer is a relatively new phenomenon in book publishing. If you asked me fifteen years ago if a book needed a book trailer, I would have looked at you like you had three heads. And you would have got a resounding, “Are you mental? It’s a book not a film!”.

As recently as a year-and-a-half ago, industry professionals like Design consultant and ALLi Partner Member Aimee Coveney were already calling the benefit of this new trend. In part, she said, “Video media is causing quite a stir in today’s book industry. Online promotion is highly effective in reaching a wide audience, and sharable media, such as videos, play a key role in gaining attention for many professionals.” (check out her super useful article How to Use Book Trailers for Successful Book Marketing)

The shift into technology

Working in Internet Technology myself, I’m an avid observer of the way regular people, consumers, interact with technology and the Internet. It’s changed an incredible amount during the past decade. It still blows my mind and I saw it happen in front of me. I would even say it’s been an astonishing journey, with more people using technology with each year that passes. And that’s everyone, not just the Millennials. Boomers were late to the party, but are now neck-deep and using it for the accessibility options and ease it creates for them in their twilight years. I think that’s fantastic, because that’s the exact purpose technology should serve, to make lives easier, not rule them. But I digress and that’s a topic for another day…

Ten years ago, the most advanced thing most people owned was something like a Blackberry.

Now? Your grandmother has an iPhone. Your two-year-old is navigating games and videos on a tablet. People routinely share memes and videos through social media without a thought.  We never forget to check our email. We’re Facetiming and Skyping each other across the world every hour of the day. Using

Google Hangouts for video conferences and watching videos served up to us in Facebook. There’s a brand new classification of films, not just videos, but short and feature-length films, for movies created with mobile phone cameras. Twitter videos in our feeds keep us amused while we connect in our time-crunched character-limited snippets of free time. And as of February of this year (2017), Snapchat killed the 10 second video run limit, so you can share videos that last as long as you want. Through an app on your phone.

Does anyone remember the 80s when we were lugging around VHS video cameras roughly the size of a Cocker Spaniel???

Films are produced faster and faster and pumping out trailers, so we can quickly decide if we want to watch them. According to the fortunelords.com article 36 Mind Blowing YouTube Facts, Figures and Statistics – 2017, 300 hours of video is uploaded to YouTube every minute. And almost five billion (that’s billion, dude) videos are watched on YouTube every day. We’re filming each other and everything we do – from the lunch on our plates to our children’s first steps to ourselves sitting at our desks doing nothing at all. And we’re sharing it with each other. Every. Single. Day.

Human beings love video and have since the first moving picture show. It’s a story and we love those, because we’re tribal and want to listen to the elders tell us tales of fantastic things we’ve never thought of before. And it’s alive and moving and interesting just like we are. A book trailer grabs our interest fast and gives us what we need without us having to do anything at all. This is a plus in a world where everyone is doing twenty things at once and can’t always absorb text.

The Internet changed the way we read

We read books on Kindle, Kobo or on phones or tablets. Buy digital books and don’t own print books, because they weigh a tonne. Instead, we carry thousands of digital books wherever we go. My mother is a Boomer. An avid reader, the weight of the large print books she had to start reading meant she couldn’t carry more than a couple with her. Now? She reads books on an ebook reader, blows the font up as big as she wants, and is back to devouring fifty or sixty books a month. I’m GenX and everyone I know reads digital books and also purchases print books, because we love to own them. But on the train to work? We’re reading the digital versions, because it’s convenient in a crowded space.

When you’re thinking about a book trailer, this is your audience right here, dude. Different generations, but all readers and all using technology. Somewhere in that demographic are people who read your genre or a couple of genres. And they want to read your book. They want to know your story.

What can a book trailer do for you?

As a self-published author, you want to create ebooks for cost-effective ease of access to your work. And also create a book trailer for each. Most likely? Genre fans are reading those digital books on the same device you could reach them through with your marketing. A book trailer should be a part of that marketing plan.

An ebook is a great place to do it, too, before you even get to social media marketing. Insert the book trailer for your next story into your ebook content in the back matter of your last book. It’s a great way to tease your fans and make them hungry for your next release. Awesomesauce.

Some of the benefits:

Some practical advice – things to consider when making a book trailer

Don’t know anything about making videos?

It’s not necessary to be a videographer to make a book trailer, so don’t panic. If you’re a creative person and like working with images in programs like Photoshop, you have the skills. You could come up with a great-looking simple video yourself . Just keep it basic and elegant and don’t try emulating a movie trailer.

Using an online program like Rocketium could help you make a slide show type of book trailer. They have templates and royalty-free music, so you don’t have to search. The free version tacks their logo on the end, but you can play around with it without spending a penny. Upgrade later to the lowest price plan under Individual Plans to remove their logo. Alternately, there’s MovieMaker, ScreenFlow, iMovie or YouTube to create your “story”. 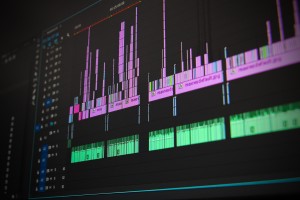 For anyone who doesn’t like to work with programs or images and knows there’s no way they could make a book trailer themselves, there are lots of services. I’ve looked at quite a few and find most of them overpriced, so don’t get taken in. If they ask you for thousands of dollars instead of hundreds, back away. The best one I’ve seen to date is through BooksGoSocial.com – Laurence O’Bryan and the organisers of the Dublin Writers Conference. They’re honest, love helping self-published writers, give great advice, have helpful videos up on YouTube, are fair and their prices are the lowest I’ve seen for the high quality you get. All their services are like that. And no, I don’t know them, I just like them. 🙂

TLDR? So to recap…  Yes, you need a book trailer. Yes, you can make one yourself. And yes, there are also services that can make one for you.

Writers do it one-handed Coffee Mug